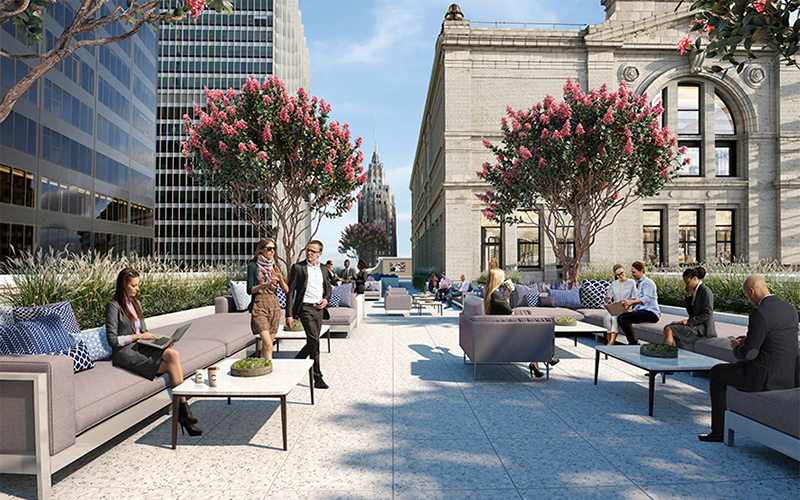 The New York office has a millennial makeover - Financial Times

For Joseph Artusa, removing the green marble that has long obscured the soaring entrance of the Equitable Building in lower Manhattan is an attempt to make amends for an architectural sin committed by the property’s previous owner, the late Harry Helmsley.

“We don’t know why he did it, but he did,” said Mr Artusa, a vice-president at Silverstein Properties, shaking his head.

Clearing away the offending marble is one element of a $50m renovation that is part of a wider movement across Manhattan to scrub ageing buildings of the tastes of an older generation and make them more appealing to millennials.

Silverstein Properties is straightforward about who it is trying to impress: A millennial like the scruffy young man wearing a felt hat and pedalling a bike who is featured in the marketing materials it has created for the Equitable. (Perhaps he is heading to a high-paying job at one of the tech or media companies that has enlivened a lower-Manhattan neighbourhood once dominated by financial services.)

To lure him, Silverstein is opening the building’s lobby, bringing in natural light, adding a bike locker and playing up transport connections to Brooklyn. The finishing touch will be a sprawling new rooftop terrace and lounge where young workers can mix, mingle or do yoga.

For decades, corporate real estate decisions were dictated by the wants and needs of chief executives, with proximity to their homes a particular consideration. That is changing now as companies fight to attract young talent with different ideas about how and where they work.

“What we’ve witnessed in the last four or five years is a shift in the marketplace that has been driven by the workforce,” said Bruce Mosler, chairman of global brokerage at Cushman & Wakefield. “The millennial workforce is now the largest part of the workforce. That generation is now who you’re vying for.”

For companies, that means catering to workers who favour public transport and bike sheds over black cars; who require built-in shopping, cafés and fitness centres, since their work and leisure time tend to blend; who revere natural light, delivered through floor-to-ceiling windows; and seek informal spaces, with must-have features like rooftop terraces such as the one at the Equitable.

Even all that is not necessarily enough, developers said. There is also the desire for a building that conveys a sense of authenticity and identity — a compelling story, as architects put it.

“If somebody’s going on a 10-building tour, how do you differentiate yourself?” asked Paul Amrich, a vice-president at real estate broker CBRE.

Owners of Manhattan’s ageing building stock are trying to answer that question, as new towers soar en masse for the first time since the 1980s. In the past four years, 10m square feet of new supply have come on the Manhattan market, according to Cushman & Wakefield, with another 24m expected over the next five years.

Much of that is due to the sprawling Hudson Yards development taking shape on the far west side of the island, where new buildings promise far greater efficiency as well as hip amenities, like proximity to the High Line elevated park. In pitching it to corporate tenants, the Related company touts its avant-garde appeal to young workers. It has lured tenants from apparel maker Coach to private equity firm KKR.

Next door is One Manhattan West, a 67-story tower owned by Canada’s Brookfield. It is already 90 per cent leased a year before its scheduled opening, and will feature “temples” of retail, fitness and food, according to Brookfield’s head of retail leasing, Michael Goldban.

Midtown, Manhattan’s longtime corporate fortress, is under pressure to fight back. One of the boldest examples is 1271 Sixth Avenue, the former Time-Life building, which is undergoing a $600m renovation. Other buildings nearby are attempting similar fixes. “It’s more than just redoing your lobby. It has to be a complete makeover of the asset,” Mr Mosler said.

Craig Deitelzweig, chief executive of Marx Realty, agreed. “[The building] has become part of the tenant’s brand,” he said, “and today’s tenants are very brand-conscious.”

Marx recently spent $45m to redo a tower on East 44th Street, rechristening it “10 Grand Central”. Among other changes, the lobby has been reconfigured and made to resemble a members-only club, with banquettes, polished brass and white-gloved doormen more commonly found in a boutique hotel.

In financial terms, Mr Deitelzweig estimated the investment had helped to boost rents by 30 per cent. “I think you have to do it,” he said. “If landlords don’t think creatively and in a future-forward way, they won’t exist in 10 years.”

Rents and occupancy rates have held up in Manhattan in spite of the new supply, although landlords are resorting to the increased use of concessions — discounting rents, absorbing remodelling costs — to maintain them.

At the Equitable, once the world’s largest office building when it opened in 1915, occupancy rates are still hovering around 90 per cent, according to Mr Artusa. But Silverstein Properties did not want to wait to test its appeal in a changing market, and decided late last year to press ahead with the renovation.

The architects, Beyer Blinder Belle — who are also tenants — are trying to tread a narrow line: They want to emphasise the Equitable’s heritage, playing up the authenticity that millennials crave, while also outfitting it with high-speed internet, better dining options and other conveniences they demand.

Some of the details are painstaking. Working from old pictures, architect Carlos Cardoso produced new brass grills to match the originals above the elevator doors. At the same time, the elevator ceilings were raised to suit modern tastes.

“We wanted to create a compelling story for this building,” Mr Cardoso said.