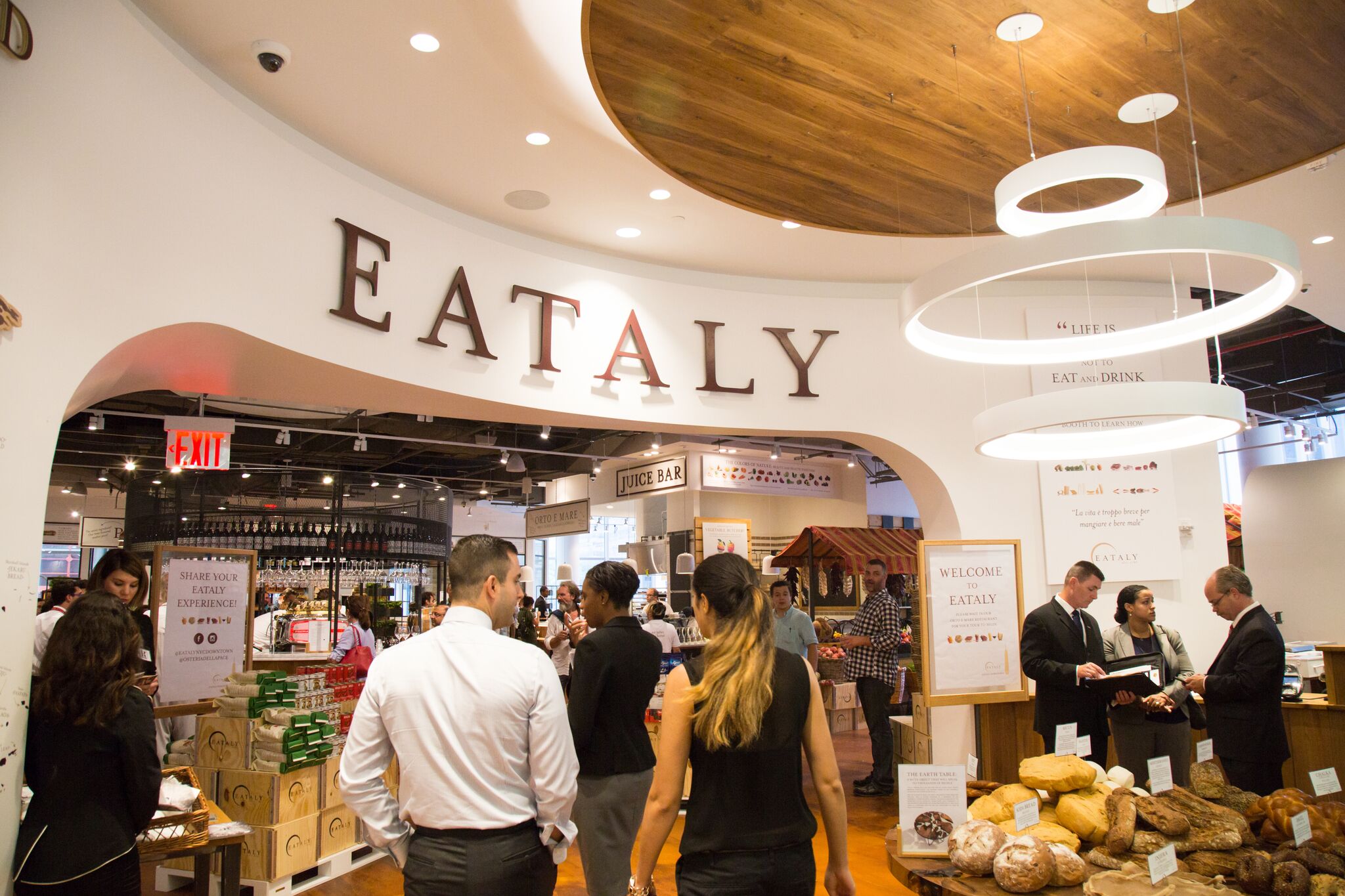 Eataly, hellbent on turning New York into a Rome with streets that are easier to cross, will open its second location in New York this month in the Financial District at 4 World Trade Center. We got a sneak peek at the 48,000 square foot food emporium today, and it was basically like diving into a beautiful sea of bread.

There is, indeed, a lot of bread at the new Eataly Downtown—the puppeteers behind the fancy food market decided to make my favorite food the center of attention here. To celebrate the world's most glorious invention, the market plans to display ten to 12 international breads on a table made of 48,000 fossilized wood each day. "The principle food that exists in every nation in the world is the bread," Oscar Farinetti, Eataly's CEO, told us in an interview. "We want to invite the people to eat with different bread in the world. It's one symbol for to tell, please stay together, speak together, eat together."

They'll be featuring bialys and bagels from Kossar's when the market opens on August 11th, but at today's preview, the table boasted injera from Ethiopia, soda bread from Ireland, challah from Poland, and mantou from China, to name a few.

The new Eataly doesn't just have bread, though the bread is certainly a highlight. Like the Eataly in Flatiron, breakfasters can drink Lavazza espressos and cappuccinos at one of two coffee bars and snack on cornetti (think less buttery croissants, a morning staple in Italy), though starting at 7 a.m. the downtown shop will also serve egg sandwiches, salty pizzas, and a full sit-down breakfast for Americans who can't subsist on light pastry in the A.M. There's a wine bar, a panini station (real panini, not that bullshit grilled stuff), Eataly's renowned Rossopomodoro restaurant serving Neopolitan pizza and pasta, a fish restaurant that serves seafood pastas, and a full-service restaurant run by 2-Michelin starred chef Riccardo Orfino.

There's also all the cheese and salumi a human can dream of—the market boasts 1300 varieties of cheese (all of which come from either Italy or the United States), in addition to a fresh mozzarella station, along with Italy-sourced prosciutto, mortadella, and rare salami (usually salami has to come from the States, but Eataly got special permission to import from abroad). There's a station serving fresh pasta, there are meats from Pat La Frieda, and fish from local docks on Long Island and Massachusetts. Prepared foods crafted from recipes by Eataly founders Mario Batali and Lidia Bastianich are available for purchase.

There's a pasticceria with pasticcini—tiny pastries filled with pistachio cream, nougat and other goodies—and tiramisu, and there's a gelataria, obviously. Like the Eataly in Flatiron, you can also purchase Italian dry pastas, cookies, and beers like Peroni to take home. They also have Dogfish Head, for some reason. And if you'd like to learn how to turn these ingredients into feasts, the shop hosts free Foodiversità demonstrations and classes.

A few downsides: though Eataly's Flatiron spot has a beloved Nutella Bar, Eataly Downtown's swapped out the sweet stuff for a salad bar, because apparently some people think vegetables are healthier than chocolate/hazelnut spread. There is also no rooftop bar here, since 4 WTC is now 74 stories high.

And then, there's this—the market is located right next to what was once Ground Zero, and the restaurant and eating areas offer full views of the 9/11 Memorial reflecting pools. It's a beautiful spot if you're a tourist, but native/longterm New Yorkers may find it unsettling to feast on fancy wine and pasta where they once watched first responders sift through smoldering rubble for human remains. This unease crops up more and more as the World Trade Center gets built back up, and it might not upset everyone—indeed, Eataly's managing partners specifically sought out the location for its significance (and, probably, for the tourist foot traffic). Still, it bothers me, so I'll probably have to stick with Flatiron for my salumeri fix.

Eataly Downtown is located on the 3rd floor of 4 World Trade Center at 101 Liberty Street between Greenwich and Church Streets // eataly.com. It opens August 11th.

A year after purchasing 1735 Market St. in Center City, Silverstein Propert... READ MORE
Nationally Ranked Law Firm Cozen O'Connor Signs 77,000-Square-Foot Lease at 3 World Trade Center Silverstein Properties, one of New York City’s leading real estate developm... MORE
Q&A: How Silverstein Capital Is Girding for the Slowdown President Michael May discusses the company’s first year and what its growt... MORE
Silverstein Properties Unveils Equitable Building’s Mural Series At 120 Broadway In The Financial District The latest phase of Silverstein Properties’ extensive restoration of the Eq... MORE
Street art moves into Lower Manhattan landmark Artists are transforming the space on some of the floors inside the Equitab... MORE
Disney Unveils Designs for New Hudson Square Campus After acquiring a full block in Hudson Square for $650 million last year, D... MORE
Owners Magazine 2019: Talking With the Top Developers and Owners of NYC "At the World Trade Center, we signed some of the most exciting and best-kn... MORE
×