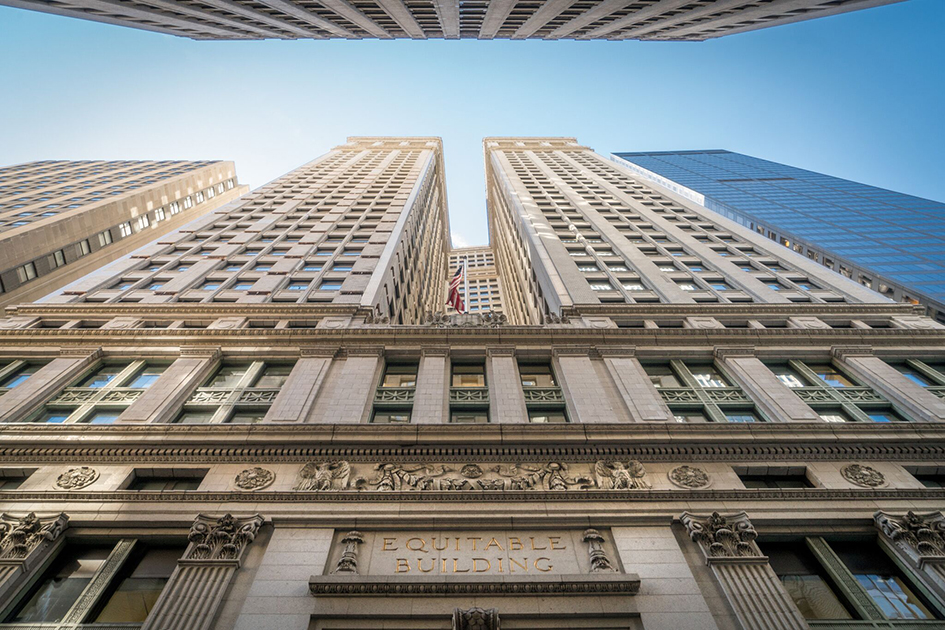 Equitable Building, Spur for Modern Zoning, Will Get a $50 Million Face-Lift

In 1915, when the office tower now known as the Equitable Building was completed at 120 Broadway in Lower Manhattan, it boasted all the latest conveniences — bad news for the owners of nearby office buildings, which were instantly rendered obsolete.

It was also bad news for the tenants of those buildings because the tower’s swaggering size — it was the world’s largest office building at the time, covering an entire city block and shooting up 40 stories — cut off sunlight that had previously streamed into their offices. And it was bad news for passers-by on the streets and sidewalks, which were also cast in shadow.

But it was an opportunity for critics who had long clamored for controls on untrammeled development and renewed their push for change. In 1916, New York’s first comprehensive zoning ordinance was passed, one that would inspire similar measures in municipalities across the country.

Today, that former pariah is a beloved architectural treasure, designated both a city and a national landmark. Silverstein Properties, its owner, is embarking on a $50 million renovation that, among other things, will restore grandeur to the through-block corridor on the ground floor and re-establish it as a public thoroughfare.

And in a twist, one of the building’s latest tenants is New York’s Department of City Planning — the keeper of the zoning code — which has just opened a new public hearing room in the very structure that helped bring about land-use controls 102 years ago.

But the Equitable Building has always played a remarkable role in real estate.

Ernest R. Graham designed the building, with an H-shaped superstructure atop a six-story base and a steel frame, clad in granite, terra cotta and brick.

It was advanced in other ways, too. Four subway lines led directly into the building. Forty-eight passenger elevators provided speedy vertical transportation. According to Carol Willis, an architectural historian and the director of the Skyscraper Museum, the building pioneered the use of express elevators to sets of floors, promising 16,000 workers a wait of no more than 30 seconds.

“It was all about efficiency,” she said.

Other towers, including the nearby Woolworth Building, were taller. But the Equitable Building — a speculative structure whose floor area was 30 times the size of its lot — was far bulkier. And its shadows stretched seven blocks at their peak, prompting property owners in the vicinity to seek reductions in tax assessments because of the decline in the value of their holdings.

The 1916 zoning resolution separated incompatible uses, like factories near homes. And it required that towers be set back as they grew taller, thus permitting more light to reach the street and giving rise to the “wedding cake” profile of many icons of the New York skyline.

Zoning left its mark on New York, but it also shaped cities around the country. “It spread like wildfire,” said Eugenie Ladner Birch, Nussdorf professor and co-director of the Penn Institute for Urban Research at the University of Pennsylvania.

The same year that New York enacted zoning, Chicago formed a zoning commission, and by 1923, it had its own comprehensive ordinance.

New York endlessly tinkered with its zoning as the city grew. In 1961, a major overhaul encouraged towers in plazas, and in the decades since, more than a thousand pages of amendments have been added and numerous changes to the zoning maps have been made.

The Equitable insurance company moved to Midtown Manhattan, and the building at 120 Broadway passed through the hands of a succession of big-name developers. When Silverstein Properties acquired it in 1981 for $60 million from a syndicate led by Harry Helmsley and Lawrence Wien, it also entered into a 999-year ground lease with the real estate companies that owned the land under it.

The building was appealing because it offered a chance to gain control over an entire block in the financial district, said Larry Silverstein, chairman of the company that bears his name.

The terms of the ground lease were particularly interesting, he said. The lease has no reappraisal provisions, meaning that his company still has 961 years left on a lease requiring annual payments of less than a million dollars, even as real estate values have soared. “It’s like owning land and never paying for it,” he said.

When he purchased the building, Mr. Silverstein said, it was “a sad, old lady that needed a huge amount of time, attention and love.” A face-lift in the 1980s cleaned the facade and recreated eroded terra-cotta details. The work extended to the lobby, where the Tennessee pink-marble floor was repolished and the vaulted, coffered ceiling, decorated with plaster rosettes, was restored.

For decades, the mahogany-paneled Bankers Club of America — where Queen Elizabeth II and Winston Churchill once dined — operated on the 39th floor. When Silverstein acquired the building, a luncheon club was still in operation, but as such enterprises dwindled, the company leased out the space for offices.

Food and beverage service will return to the building with the capital improvements, which are scheduled to begin in May and are expected to take a year. The plans are being overseen by the architecture firm Beyer Blinder Belle, a building tenant. A cafe and espresso bar is likely to occupy the 40th floor, according to Silverstein.

The renovation will also add a terrace on the roof, the amenity du jour in New York. Designed by another tenant, the landscape architecture firm MPFP, the terrace will be an elevated platform bordered by evergreen hedges and furnished with low-slung, all-weather seating.

Those features will be for the exclusive use of tenants and their guests, but changes on the ground level will benefit the public at large.

The wide, ground-floor corridor, which once allowed anyone and everyone to cut through the building, will become a public pass-through once again. The security desks that were installed after the Sept. 11 terror attacks will be removed.

The public will also be able to stop at the shops lining the corridor, which are another part of the renovation. Tenants will proceed to the elevator banks for their floors; there, they will swipe smartphones equipped with a passcode or ID cards at turnstile sensors to gain entry.

The bronze grillwork that once decorated all the elevators will be recreated. The dark green marble that now fills the arch above the Broadway entrance will be replaced with glass decorated with more grillwork, allowing sunlight to bathe the lobby once again.

Working from grainy old black-and-white photos, the architects designed LED chandeliers for the lobby modeled on the originals. Rambusch, the New Jersey lighting firm that created fixtures for the Empire State Building, is making them. On a recent afternoon, after two samples were hoisted to the 31-foot ceiling, Mr. Silverstein arrived to give his stamp of approval.

The developer said he planned to “hold on to this sweetheart” of a building, but makes no bones about his hopes to benefit financially from the improvements to 120 Broadway. According to a company representative, the 1.9 million-square-foot building is 93 percent leased, with asking rents in the high $50s per square foot.

The Department of City Planning, which moved in a couple of years ago, is still working through a punch list for its new public hearing room in the concourse below the lobby that leads to the subways.

Marisa Lago, the agency’s director and chairwoman of the City Planning Commission, recently opened the first review session in the space. She checked off the ways the space improves on the previous location: more than three times the seating capacity, monitors spread throughout the audience area and an agenda-tracking display in the outer waiting area so that presenters know when to hustle in.

“I think it’s particularly appropriate,” she added, “that we are now hearing the people’s land-use business inside the building that spawned the 1916 zoning resolution.”